“Once, they hung me forward with my back against the chair,” he said. “Both my ankles were shackled below the chair’s seat and wrists shackled on the chair’s small metal table. My feet were not touching the floor. It was like hanging on the chair. The weight of my whole body was borne by my shackled ankles and wrists. This made me feel that my chest was going to split into two and all my intestines were going to fall onto the floor. I became very dizzy and could not see properly.”

The Chinese security officials beat him on his back with tiny metal sticks, kicked him and gave him electric shocks in his mouth. “The pain the chair caused when they hung me was too extreme to feel any of the pain caused by the metal sticks or the kicking. When they gave me electric shocks, I could feel nothing. I could only smell the burning of my own flesh,” he said. 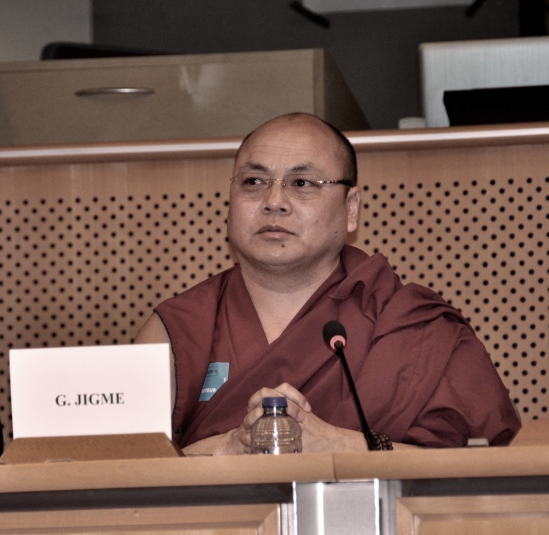 The pain of thirst was the second worst torture for him. Due to heavy loss of blood during torture, “I felt like I was dying from thirst. I was only given a very small amount of water. Over time, I got used to hunger and sleep deprivation, but never to being thirsty,” he said.

He was arrested for the second time in 2009 and again in 2012. Fearing for his life during the detention in 2012, he managed to escape in the middle of the night. While he was hiding in the mountains, he learned that the Chinese police had put out a warrant for his arrest for murder, which he never committed.

He thanked the European Parliament and requested the Parliament to call on China to impose a moratorium on the settlement of Tibetan pastoral nomads and to allow diplomats, parliamentarians and journalists, free access to Tibet. Finally, he called on China to improve the living conditions of the over 2,000 Tibetan political prisoners currently in Chinese prisons who have been detained and sentenced for peaceful expression of views or non-violent dissent and for their immediate release.

He also appealed for the release of his friend Shokjang, a young Tibetan writer and blogger sentenced to three years in prison on 17 February 2016 after he wrote a blog post about an intense build up of Chinese security forces in the Rebkong area.

Speaking on China’s new counter-terrorism law, he said it gives an even larger scope for the penalization of almost any peaceful expression of Tibetan identity, acts of non-violent dissent, or criticism of ethnic or religious policies. 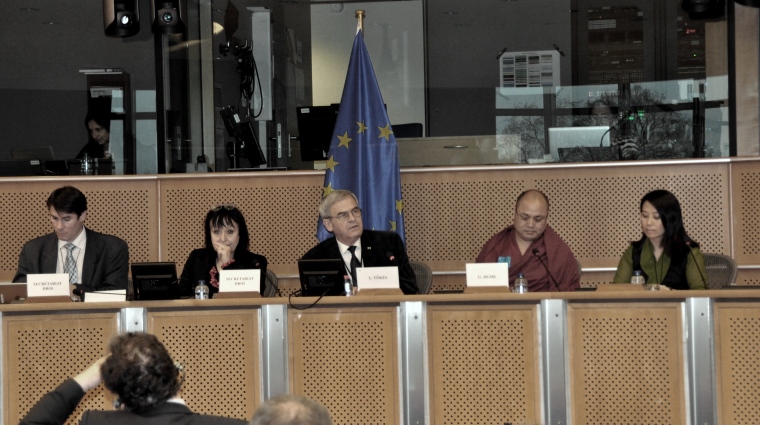 Mr Tőkés László, a senior member of the Subcommittee on Human Rights chaired the hearing. Dr Joëlle Hivonnet of the European External Action Service (EEAS) said in her statement, “We were humbled by his (Golog Jigme) testimony. It is important for us to hear first hand information.”

Golog Jigme had met the Council of the EU’s Working Party on Human Rights (COHOM) and the Asia-Oceana Working Party (COASI) Chairs, as well as officials from the European External Action Service (EEAS) on Monday. “I know what it is to live under Communist rule because I grew up in Romania,” said Mr László in his concluding remark.

Golog Jigme had a detailed meeting with Amnesty International, Human Rights Watch and International Federation for Human Rights yesterday morning.  In the evening he spoke to the members of the Tibet Interest Group in the European Parliament and “Leaving Fear Behind” documentary was screened.

He arrived in India in May 2014. The Swiss authorities granted him political asylum in 2015. He is visiting Brussels to share first-hand account of his experience in a Chinese prison and his way to freedom. His visit was jointly organised by the International Campaign for Tibet and Bureau du Tibet, Brussels.

“First of all, I would like to greet every one of you. My name is Golog Jigme. I was born in a nomad’s family in Eastern Tibet. I am a non-violent freedom fighter. I am a human rights defender. I am a filmmaker. I made a documentary called “Leaving Fear Behind”. Because of this, the Chinese authorities arrested and tortured me. Why did I make this documentary? The Chinese were propagating lies about the situation in Tibet. I wanted to show the real situation inside Tibet.

In 2008, there was a huge uprising all over Tibet. I participated in these protests. For making the documentary and taking part in these protests, the Chinese arrested me three times. You wouldn’t believe how the Chinese security forces arrested me, a Tibetan Buddhist monk. Over 60 policemen and over 300 military officials came and arrested me. When they arrested me, they pointed two rifles at my head. They beat me with their rifle butts. I was knocked to the ground and was bleeding. My whole body was soaked in my blood. That is how they arrested me. There were military vehicles all over the village. This is just shocking and unspeakable. That is how I was arrested in 2008.

They beat me on my back with tiny metal sticks, kicking me and giving electric shocks to my mouth. The pain the chair caused when they hung me was too extreme to feel any of the pain caused by the metal sticks or the kicking. When they gave me electric shocks, I could feel nothing. I only smelt the burning of my own flesh.

After a few weeks, the skin from my bottom began to rub off through the four holes cut into the iron chair seat.  I was removed from that iron chair occasionally, but then faced beatings on the floor. They shackled my arms around a stove’s chimney. The heat was so strong there was sweating coming from his face. My hands and chest were burned.

The prison authorities wanted me to give them the names of the Tibetans who spoke in my documentary. Also they wanted to know who told me to participate in the peaceful protests. That is why they tortured me.

The pain of thirst was the second worst torture. Due to heavy loss of blood, I felt like I was dying from thirst. I was only given a very small amount of water. Over time, I got used to hunger and sleep deprivation, but never to being thirsty.

I am a non-violent freedom fighter and with great pride I can tell you that I did not betray one single person. I did not respond and they said, if you don’t speak, your mouth is of no use. And then with a lighter they burnt my lips three times. The pain was unbearable. I cannot express how this felt. That’s how I was tortured for 51 days. I am a living testimony of Tibetan people’s suffering in Tibet. It’s not only me. There are currently over 2,000 Tibetan political prisoners in Tibet.

I am at the European Parliament today to share with you, the torture and sufferings of my fellow Tibetans. But, the mental torture is worse than physical torture. Something you could not imagine. I still wonder why they tortured me mentally. It was terrifying. They forced me to denounce His Holiness the Dalai Lama and the Tibetan Youth Congress. They said no one could protect me. They said, “the West wouldn’t protect you. America won’t protect you. If there is someone who can protect you, you can call him now”. “There is no one who will save you. If we kill you now and put your body into the dustbin, no one will care about that”, they said. I went through a lot of hardship, but I always continued my activities for the Tibetan people. No matter how hard they tortured me, not even one day did I give up my fight for the Tibetan people.

I was certain that my life was in danger. Fortunately, I was able to escape one night. While I was hiding in the mountains, I learned that the Chinese police had put out a warrant for my arrest for murder, which I never committed.

I did not want to leave my country. I wanted to continue my human rights work. But when my life was at risk, I had no choice but to escape. Many people risked their lives for my escape.

Today, I appeal to you. Please don’t’ pretend as if you don’t see and hear the Tibetan people’s suffering. Tibet has become like a prison under Chinese occupation. I escaped from this prison. I came to a free country. My body is in a free country but my heart will always remain with the suffering of my Tibetan brothers and sisters. When I think about what they go through, there is not a single day I feel happy being in a free country.

Our freedom struggle needs support from you. As I said, there are over 2,000 documented Tibetan political prisoners who are going through a lot of suffering and torture. Tibetans are protesting against Chinese rule through self-immolations. Over 140 heroes have self-immolated. So, it is important that we talk about these people and their plight and not act as if we don’t see them.

I thank you very much for giving me this opportunity to speak in the European Parliament.”