BRUSSELS: Office of Tibet Brussels organised a two-hour long conference in the European Parliament (EP) on Reincarnation of Dalai Lama: Why it Matters to China, yesterday. And it was co-hosted by the major political groups in the EP, European Peoples Party (EPP), Socialists and Democrats (S&D), Alliance of Liberals and Democrats for Europe (ALDE) and the Greens/European Free Alliance.

Two experts on the subject presented their views. At first Ven. Dagpo Rinpoche drew the attention of the conference dispassionately on how the reincarnation system came into being in the Tibetan society, how the system has benefitted the society, what are occasional pitfalls of the system, who has the authority to decide the reincarnation of a particular reincarnate and what has been the process of seeking the reincarnation of the Dalai Lama. His presentation brought out the singular aspect of this tradition in the Tibetan society as a societal custom and tradition.

Ven. Dagpo Rinpoche is a highly respected Tibetan Buddhist master who studied under eminent masters in several monasteries, notably at Dagpo Shedrupling. He arrived in France in 1960 with a scholarship from the Rockefeller Foundation and taught Tibetan language and philosophy at INALCO (Paris-Dauphine University) for nearly thirty years.

Ms Marie Holzman on the other hand highlighted the contradictory outlook of a Communist Chinese regime vis-à-vis religion. While China is an atheist country currently there are over 10 million Christians, 20-30 million Muslims and over 300 million Buddhists. In her view, the practice of spirituality is a way of dissent in the highly material and controlled society. The Chinese interest to have the reincarnation of the Dalai Lama is a way to control Tibet. 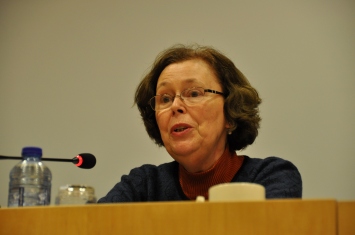 Ms Marie Holzman is a Sinologist specialising on Contemporary China. She also taught at Paris 7 University for twenty years, gives conferences in a number of circles and is an active contributor to various monthly and quarterlies such as Politique Internationale.

The conference was opened by MEP Thomas Mann. MEP Preda moderated the panel. MEP Molly Scott-Cato and MEP Laszlo Tokes made opening remarks strongly expressing their views in support of Tibet and the incredulous way China is misrepresenting world-wide the concept and the tradition of reincarnation. MEP Csaba Sogor also recalled his country’s experience under the Communist regime of Ceausescu. He said that spirituality will not be cowed down by military and forcible Communist theology.

Representative Tashi Phuntsok made the closing remarks. He reiterated that the reincarnation is a Tibetan tradition and not Chinese system. He recalled that His Holiness the Dalai Lama had made clear as early as in 1969 that the institution of the Dalai Lama will be decided by the Tibetan people. He quoted the recent rema

rks of His Holiness the Dalai Lama made in Delhi repeating the stand. Finally he quoted from His Holiness the Dalai Lama’s 2011 September 24 public statement on the issue, “When I am about ninety I will consult the high Lamas of the Tibetan Buddhist traditi
ons, the Tibetan public, and other concerned people who follow Tibetan Buddhism, and re-evaluate whether the institution of the Dalai Lama should continue or not… responsibility for doing so will primarily rest on the concerned officers of the Dalai Lama’s Gaden Phodrang Trust… I shall leave clear written instructions about this. Bear in mind that, apart from the reincarnation recognized through such legitimate methods, no recognition or acceptance should be given to a candidate chosen for political ends by anyone, including those in the People’s Republic of China”.

The conference was attended by 7 MEPs, 15 Parliamentary Assistants, the Press, Politicians, NGOs, Tibet Support Groups and the staff of Office of Tibet with total of 60 participants. It may also be recalled that this is one of the series of advocacy events being carried out by the Office of Tibet, Brussels.